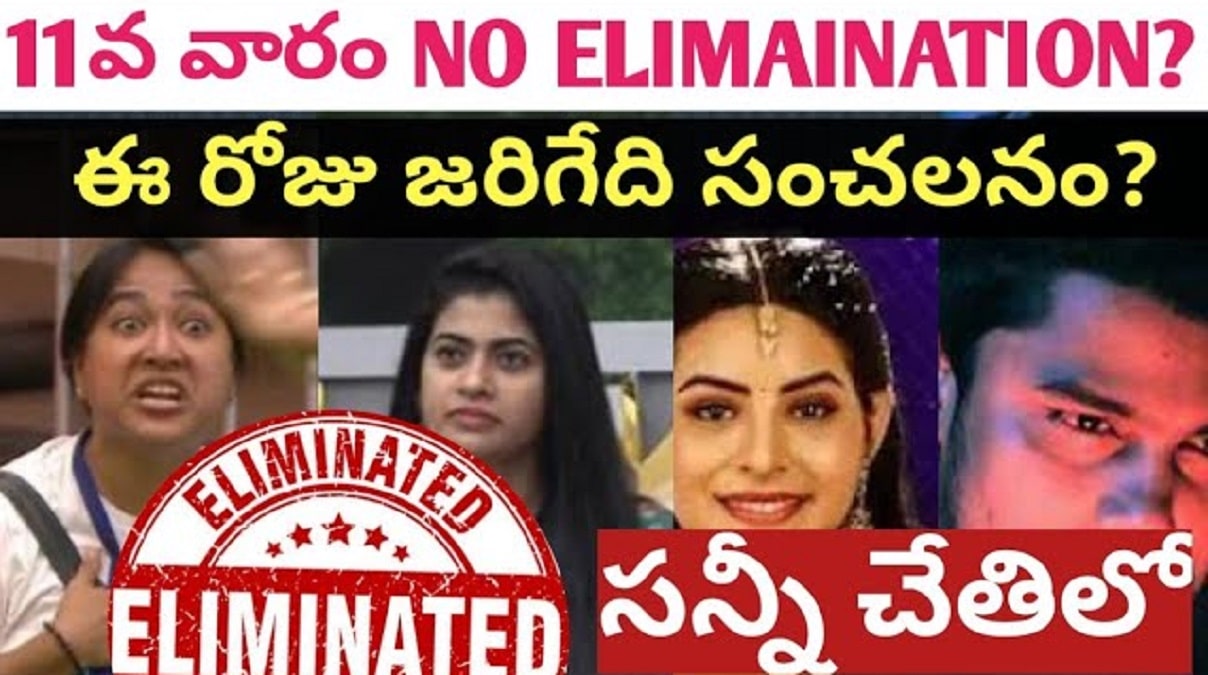 Bigg Boss 5 Telugu elimination 11th Week — This Contestant To Be Eliminated This Week From Bigg Boss Telugu Season 5: The popular and controversial reality show “Bigg Boss Telugu ” is all set for 11th Week elimination in the house. As we already informed except Anchor Ravi, all the contestants are nominated for the elimination of this week. Before talking about the elimination, let’s have a look at the latest episode of the show. In the latest episode of the show, the viewers watched the captaincy task amongst 4 contestants. As per the task, Anee, Maanas, Priyanka, and Siri had to hold the ring with a single hand. The first contestant who was out from the task was Anee and then followed by Priyanka and Siri. Follow More Update On GetIndiaNews.com

Maanas won the task and become the new captain of the house. Maanas, Sunny, and Kajal finally patched up. The BB Telugu contestants got a chance to win the eviction free pass by taking part in a task. Upon a siren in every round, 2 contestants had to enter the fire truck. Two photos of two other contestants were displayed on the house of burn. The contestants in the truck had to discuss and decide which contestant needed to be saved and whose photo had to burn. Bigg Boss Telugu 5: Double Elimination in Bigg Boss Telugu Season 5 Confirmed This Weekend

The participant whose photo remained sans burning towards the end of the task would be the winner of the eviction free pass. The Sanchalak of the task was Maanas. Firstly Ravi and Shanmukh entered the truck. Photos of Sreeram and Maanas were displayed and the two presented their disputes. Shanmukh and Ravi decided to save Sreerama and the photo of Maanas was burnt. This episode was quite fascinating and viewers watched the intense fight amongst the contestants.

Jessie was the last contestant to leave the BB Telugu house. Though, the limelight is now on the 11th elimination of BB 5 Telugu from the 8th nominations based on the final voting results of Friday. BB 5 Telugu 11th Week elimination reflects on the task performance. With the conclusion of the voting window this week, Anee Master is in danger. 11 weeks had just passed in the house. Who will be eliminated this week is raising suspense. Bigg Boss Telugu 5 Eliminated Contestant Satire On Anchor Ravi

Total 5 housemates are nominated for the elimination this week. The list of nominated contestants is given below:

Star Maa’s popular and controversial reality show “Bigg Boss Telugu 5” begins off its 11th week as the BBhousemates wrestle for the finale positions. In the latest episode of the show, Maanas became the captain of the house. Talking about the elimination, Jessie was the last contestant to be evicted from the BB 5 Telugu 5 house. Though the limelight shifts to the 11th elimination voting polls of BB 5 Telugu from the 8th evictions. Already 11 contestants are evicted from BB 5 Telugu so far. This week contestant Ravi is safe from the elimination nominations this week.

Though the voluntary exit of Jessie might sprout a turn in the 11th Week eviction plan of Bigg Boss 5. Talking about this week, all the contestants are nominated for the elimination except Anchor Ravi as he is the captain of the house. If we look at the unofficial polls, RJ Kajal and Anee Master are currently in the danger zone. The latest buzz is making rounds on the web which suggests that the audience will witness the double elimination in the BB 5 Telugu house.

As per the sources, BB makers skipped elimination last week as Jessie walked out of the show due to health issues. The organizers of the show informed to elimination thereafter. Now, BB makers are stated to be planning double elimination this weekend. Presently, Anee, Priyanka, Manas, and Siri have been selected as the contenders through different segments following the gold mining task. As per the sources, Siri Hanmath will be the ration manager.

The mini-screen onlookers wait to watch the captaincy task in Friday’s episode of the show, what has drawn the attention is the voting results which is going viral on social media. If BB Telugu polls of 5th edition on the web are believed, dancer-choreographer Anee is in the danger zone. Following her is Priyanka Singh. The stint of Anee and disrespectful behavior against Kajal did not like by the audiences.

The forthcoming episode of BB Telugu 5 is going to be amusing as the house will witness its next captain of the house and the contestants will also compete in a major task to win the “Eviction-Free” pass. The latest promo of the forthcoming episode is giving a glimpse of the task where 2 photos of two contestants will be displayed in the BB house of fire every time and they surely argue why they require the pass. In the promo Jaswanth, Sunny, Siri, and Priyanka put up their arguments. Watch this episode of “Bigg Boss 5 Telugu” on Star Maa and stay tuned with us.