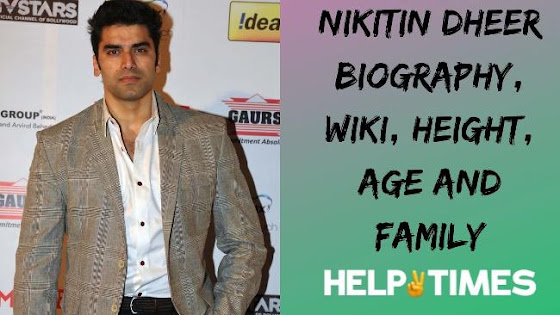 Nikitin Dheer is a model and actress from India. His popularity grew as a result of television serials. Later on, he appeared in Bollywood films. He was also seen in a number of prominent parts in films in a short period of time. Later in his career, he became a familiar figure in Bollywood films and also appeared in the Hindi web series. He has also appeared in a number of Telugu films. He is currently a well-known South Indian actor and television personality.

Nikitin Dheer, sometimes known as Nik, is well known for his heinous roles. This rugged actor was born in Mumbai on March 17, 1980, to Pankaj and Anita Dheer. He had a luxurious childhood in Mumbai. This Piscean is currently 38 years old, although he does not appear to be so, as he has kept himself in good shape. He had always known he wanted to be an actor since he was a youngster. In 2008, he made his acting debut in the film Akbar Jodha. Soon after, he was famous as a Bollywood actor when he starred with Shah Rukh Khan and Deepika Padukone in Rohit Shetty’s Chennai Express in 2013. He portrayed the evil part of Thangabali (bold it). He has also undergone black cat commando training, in addition to being known for his macho physical traits. In 2014, he married Kratika Sengar, a stunning TV actress who wonderfully complements his personality.

Nikitin began his acting career in the film ‘Jodha Akbar,’ directed by Ashutosh Gowariker. He played Hrithik Roshan’s brother-in-law, Sharifuddin Hussain of ‘Akbar’, in this film. Nikitin was hailed for his performance, and he went on to star in Vivek Oberoi’s film ‘Mission Istanbul.’ In addition, he starred with Salman Khan and Asin in the comic flick Ready as the Villain. However, Nikitin Dheer rose to prominence in the film ‘Chennai Express,’ starring Shah Rukh Khan and Deepika Padukone. He played the part of Thangbali in this film. Nikitin had built his muscles and practiced his speech in preparation for this job.

Nikitin Dheer is the son of actor Pankaj Dheer, who rose to prominence after starring in Ravi Chopra’s Mahabharata series and is also a producer. His mother is a costume designer named Anita Dheer. Nitika Shah is his younger sister. He also has Kratika Sengar, his adored wife, in his household.